News of the upcoming beatification of Hanna Chrzanowska spreads throughout the world. The Polish nurse is raising the interest, raising her professional vocation to the heights of ethics and spirituality, while remaining modest, benevolent and friendly to both the wards and everyone with whom she met on a daily basis.

The following article appeared in the pages of RCN Magazines published by the Royal College of Nursing in London. 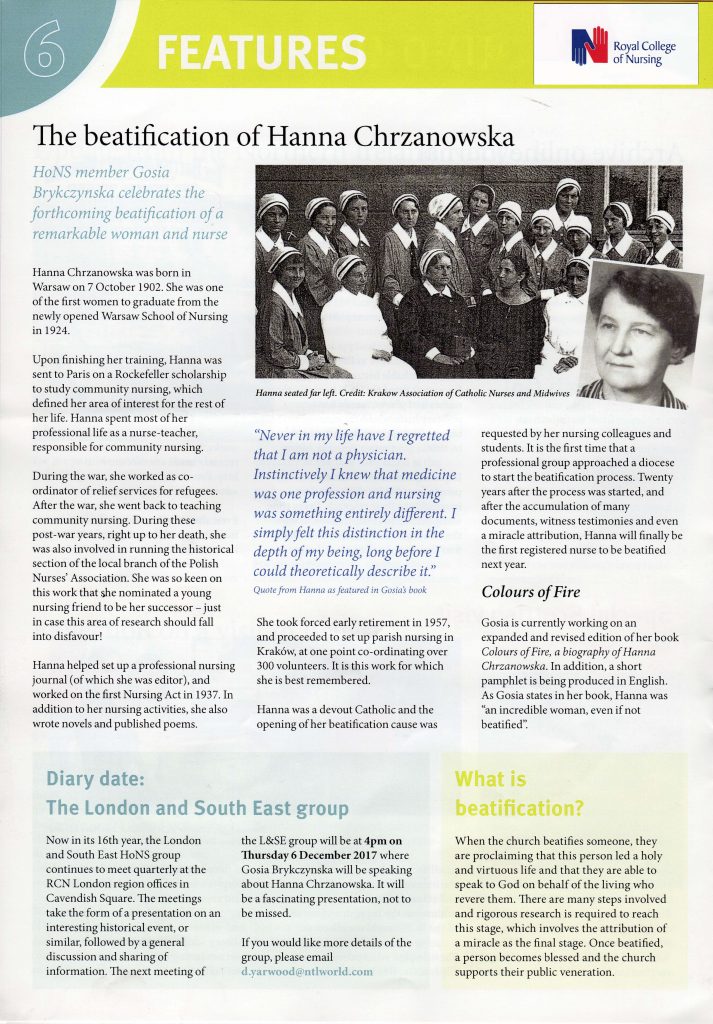 Press conference at the Krakow Bishops’ Palace on the beatification of Hanna Chrzanowska.

The ceremony of the beatification of the Servant of God Hanna Chrzanowska will take place on 28 April 2018 at the sanctuary in Łagiewniki.

“Beatification of the First Nurse

Polish nurse who inspired Saint. John Paul II, will be announced blessed. Hanna Chrzanowska (1902 – 1973) oblate, guardian of chronically ill and poor, she is considered the first nurse to be beatified. In his statements, John Paul II stated that he learned most about the needs of the sick from her. She is best known for initiating parish nursing in Krakow. “

On December 15, 2017, at the seat of the Krakow Archbishops at ul.
Franciszkańska 3, the first meeting of 37-person members took place
team for the organization of the beatification ceremony of Służebnica
Bożna Hanna Chrzanowska in April next year.

The nursing environment is represented by:

Hanna Chrzanowska dreamed of a sick patient during the coma. She smiled and said: “Everything will be fine.” And all this thanks to the pious nurses from Krakow. This is the story of a miracle that has been approved by the Vatican.

The miracle that we’re talking about took place in Krakow. The city with which Chrzanowska was multi-family and professionally connected. Although she was born in Warsaw (1902), she came to Krakow when she was only 8 years old and there she made the most important life decision: to become a nurse.

In the time of the Second Polish Republic she was staying in Warsaw or on foreign scholarships. But from the outbreak of World War II she was in Krakow until the end of her life. There she started cooperation with cardinal Adam Sapieha, then with Cardinal Karol Wojtyla.

Thanks to the kindness of the future Pope, Hanna Chrzanowska managed to realize her idea of ​​parish nursing. It consisted in providing help to the sick from the parish not only in the form of a priest’s service or material gifts, but also as a nurse’s job. And because Hanna herself was very religious and attended a mass every day, she also tried to make it also in the homes of the bedridden.

Her activity did not stop even cancer. She died in 1973, and 25 years later the beatification process began. In 2015, a decree was issued about the heroism of her life and virtues. Only a miracle was missing for beatification. At present, an extraordinary event from 2001 was recognized as a miracle.

At that time, a 66-year-old woman suffered a brain hemorrhage accompanied by a mild myocardial infarction. The result was paralysis of both legs and one hand. Her condition was so catastrophic that it was unsuitable for surgery. That is why she was transported to a conservative unit.

There, there was no contact with the patient, and the staff only kept her vegetative activities: breathing, heartbeat, etc. There was no chance for the woman to survive. However, if she did not even die and regain consciousness, her remembrance would remain forever after the stroke and infarction: the weakening of strength and range of previously paralyzed legs and hand, or their paresis; speech disorders and continuous hospitalization.

Everything, however, ended with a “happy ending”. Hanna Chrzanowska dreamed during her coma. She smiled and said: “Everything will be fine.”

Soon, the woman woke up from a coma, and surprised doctors said that their patient not only talks normally, but also moves the limbs immobilized so far. The treatment lasted for some time, but the resident of Krakow recovered.

Why, however, did the blessed one intervene in this particular matter? Well, a healed woman had a nurse friend. On the day on which the unfortunate events described above (strokes and infarcts) took place, the nurse participated in a monthly mass celebrated with a request for the beatification of Hanna Chrzanowska.

The members of the Catholic Association of Nurses and Midwives mainly went to these masses. The nurse also belonged to him. She also called on the Eucharist gathered friends from the said Association to refuse a novena for the healing of a sick 66-year-old from Krakow due to the servant of God Hanna Chrzanowska.

The novena began immediately, ie immediately after the appeal in this matter. And it was effective, as evidenced by the unexpected improvement in the condition of the person for whom they were prayed. And because Chrzanowska was a nurse, it can be said that through her intercession she did a favor to her colleagues.

Let us add that this article was largely thanks to the kindness of Fr. Andrzej Scąbra. referent for the canonization of the Archdiocese of Krakow. He gave willingly the information necessary to describe the miracle performed due to Hanna Chrzanowska. Ks. Scąber also denied the information functioning on the Internet, that the person who gave the grounds for the beatification of Hanna Chrzanowska was an unbelieving man who after a miraculous healing from a cerebral aneurysm converted to Catholicism.

The article appeared on the Aleteia portal

On August 22, at the initiative of priest parish priest of Saint. Nicholas, father Józef Gubała,
a working meeting was held to determine the location of the reliquary in the church
Servant of God Hanna Chrzanowska.
The meeting was attended by the referent for the canonization of the Archdiocese of Fr. dr Andrzej
Scąber, conservator of monuments Mr Piotr Białko.
The nursing community was represented by: members of the Catholic Association
Nurses and midwives Krystyna Pęchalska and Helena Matoga, president of Małopolska
District Chamber of Nurses and Midwives Dr. Tadeusz Wadas and a priest
nurses and midwives Fr. dr Kazimierz Kubik.
Arrangements: development of the reliquary’s design, location of the sarcophagus – in the side aisle
church.

Here are some valuable souvenirs documenting the work of Hanna Chrzanowska in both professional and literary fields.

Hanna Chrzanowska has already received several important publications about her life, service and spirituality. Below we present pictures of the covers of these publications and websites where information about her is available.

Information about Hanna Chrzanowska on the website of the parish St. Nicholas in Krakow, where her current resting place is

When the patient’s door was closed, she jumped in the window. She loved mountains and Beethoven. In every, even the most deformed body, she saw a man. How did the fate of the nurse take place, to which Karol Wojtyła himself had a weakness?

She often appeared in apartments that everyone forgot about. And there, instead of broken bottles, dirty rags or fleas, she just saw a suffering man. Perpetually smiling, in a white starched uniform. She used to say that she was “a facilitator and an intermediary from everything” by profession. “My job is not only my profession, but – vocation. I will understand this vocation if I penetrate and assimilate Christ’s words: I did not come to be served, but to serve me. “